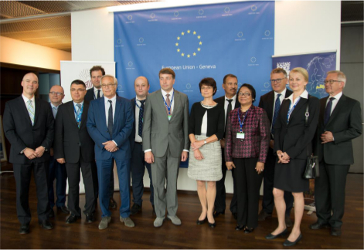 Download:
The 2015 IMM followed a tradition according to which the holder of the rotating presidency of the EU Council organises during the International Labour Conference (ILC) an informal meeting of labour and social affairs ministers to discuss and share good practices and experiences on a theme falling within the remit of the ILO.

Given this context, the 2015 IMM served as a good opportunity for the Latvian Presidency of the Council of the EU to bring together ministries of labour and social affairs from the following countries: France, Georgia, Luxembourg, the Netherlands, the Philippines, Tunisia, Turkey and the USA. In addition, the EU Commissioner for Employment, Social Affairs, Skills and Labour Mobility, the ILO Director General and its Deputy participated, alongside with international social partners’ representatives (the ITUC and the IOE).

The 2015 IMM aimed at:
a) exchanging experiences and good practices on effective ways and strategies, including new technologies and innovative tools, to expand the outreach and impact of OSH in MSEs;
b) providing valuable inputs to international, regional and national current and future efforts and work in the field of improving working environment in SMEs, including the General discussion for the 105th Session (2016) of the ILC on “Decent Work in global supply chains” and the adoption of the Sustainable Development Goals under the post-2015 UN exercise.

Latvian Presidency of the Council of the European Union: ILO and EU Presidency join forces to improve working conditions in small and micro enterprises

G20: Creating Safe and Healthy Workplaces for All [pdf 482KB]

Instruments relevant to the Promotional Framework for Occupational Safety and Health