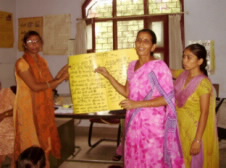 Strengthening the national policy environment in relation to HIV and AIDS in the world of work was considered necessary as 90% of HIV infections in India are reported among the most productive age group (15-49 years-old). Inter- and intra-country migration for employment enhances the risk of HIV infection. Hence the need to strengthen the capacity of the Ministry of Labour and Employment (MOLE) and employers’ and workers’ organizations to effectively partner with the National AIDS Control Programme.

The Indian Ministry of Labour and Employment, with assistance from the International Labour Organization (ILO), undertook advocacy and organized capacity building programmes for key stakeholders based on the ILO Code of Practice on HIV/AIDS and the World of Work, in partnership with associations of people living with HIV (PLHIV). The first success was witnessed in 2005 when national level employers’ organizations signed a common statement of commitment to HIV and AIDS. In 2007, central trade unions launched their joint statement of commitment.

Building upon this, the Ministry of Labour and Employment launched in October 2009 the National Policy on HIV and AIDS and the World of Work, which was developed through a consultative process involving the National AIDS Control Organization. The policy contains guidelines for employers and workers in the public and private sectors and highlights the role and responsibilities of world of work stakeholders.

The development process of the National Policy resulted in moving the workplace HIV agenda forward and enhancing ownership of stakeholders.

Next steps will consist of: