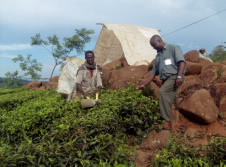 The International Labour Organization (ILO) collaborated with the Lujeri Tea Estate in Malawi with the aim of reducing HIV and AIDS risk behaviours among workers. Many of the workers are migrants who live together in compounds. They reported that it was usual for them to have multiple partners, and for village women to approach male workers for sex in exchange for money.

The ILO HIV and AIDS Workplace Education Project in Malawi engaged with ten enterprises in four sectors including the Lujeri Tea Estate and its 5,337 employees. An HIV and AIDS policy was adopted by the tea estate and an education programme was put in place.

Peer educators examined a typical daily schedule to create a regular slot where colleagues would have time and feel comfortable to talk. Mobile shades are common on the tea estate, rigged up to keep the sun’s glare off the newly-picked tea while it is weighed and stored before going to the factory. The shades are also used for tea breaks. The peer educators used the shades to talk about HIV and AIDS and they became the means of integrating HIV and AIDS education in the daily life of the estate.

A survey conducted among 100 workers before and after the intervention demonstrated that the number of workers requesting condoms increased from 28% to 86% and the number of workers asking for voluntary counseling and testing (VCT) information from 6% to 18%. A key feature in the success of the programme was the innovative use of existing structures and schedules at the workplace.

The ILO is disseminating this and other examples of good practice to show a range of ways to integrate HIV and AIDS interventions into the workplace, using structures already in place, at modest cost and with greater chances of sustainability.