Held 50 days in advance of the 2015 United Nations Paris Climate Conference (COP21, 30 November – 11 December), this dialogue aimed to offer a platform for sharing views and perspectives on how decent work and just transitions can contribute to a global climate agreement that fully engages the actors in the world of work towards low-carbon societies.

Peter Poschen opened the session, introducing the potential synergies for decent work for all and climate mitigation policies. He stressed that the world of work is full of solutions for climate change and mentioned key milestones on the decent work and climate change joint agendas such as (1) the World of Work Summit at the 2015 International Labour Conference (ILC), which focused on the implications of climate change on workers, enterprises and communities, (2) the conclusions on achieving decent work, green jobs and sustainable development adopted at the 2013 ILC, (3) the launch of the ILO's centenary green initiative, (4) the launch of the Peru & France joint initiative, (5) the French President Francois Hollande's speech at the 2015 ILC, (6) the ILO October 2015 expert meeting to develop policy guidelines to put the conclusions into practice.

Nick Nuttall, Coordinator, Communications and Outreach of the UNFCCC, provided an update on COP21 preparations and main challenges, highlighting that over 140 countries have submitted Intended Nationally Determined Contributions (INDCs). These are now being aggregated into a report that will be launched on 30 October 2015, in Berlin. He stressed that environmental finance is an important issue and is at the heart of the agreement. Nick NUTTALL also referred to the OECD's analysis on climate financial flows from developed to developing countries.

Steven Stone, UNEP Economics and Trade Branch Chief, introduced the panel and stressed that the transition to green and decent job is coming fast. Steven mentioned Pope Francis’ message in his address to UN General Assembly in New York: "when the environment is affected, we are all affected". He said that finance is central to the transition.

Hon. Esther R. Byer-Suckoo reffered to the adoption of the Sustainable Development Goals by UN general assembly and said that decent work and labour is specific to Goal 8. She spoke about how we can work together at different levels to develop the necessary policies to achieve decent green work. She said that government, employers, workers are eager to find joint solutions. She mentioned the challenges for Small Island Developing States and stressed that Barbados is already feeling the effects of climate change and using solar energy.

Hon. Esther R. Byer-Suckoo said that the newly adopted guidelines present a comprehensive policy framework for governments to work with social partners and other stakeholders including the private sector. She mentioned the nine policy areas of the guidelines and noted the collaborative spirit of tripartite meeting, emphasizing the importance of social dialogue.

Amb. Cecilia B. Rebong mentioned Philippines particular vulnerability and referred to the effects of sea level rise on arable land and the effects of changing thermal conditions on working conditions of outdoor workers. She stressed that the Philippines does not want to be remembered for the disasters and losses but for its resilience. The country is rethinking its engagement with stakeholders, looking at new technology for green industries, re-skilling workers, and adjusting education systems and social safety nets to new circumstances.

She said that corporate social responsibility is not enough as we need environmentally consciousness business leaders and mentioned the Philippines Green Jobs Bill; the first of its kind.

Amb. Rebong mentioned the launch of the "Vulnerable 20" (V20) - Barbados is also a member - at the Lima meeting of finance ministers in early October 2015. Finally, she called for increased collaboration on the nexus between work and climate change, and endorsed the just transition policy guidelines.

Yu Vicente Paolo recalled when "just transitions" were first mentioned in internal G77 negotiations in 2002. He identified finance, national level education, skills training and capacity programmes, technology transfer, social protection floors, elimination of barriers to sustainable development, and strong social dialogue as key to just transitions in the developing world. He said that the just transition idea should not be considered as an add-on to climate negotiations; it needs to be built into discussions and text in a way that can be operationalized. He added that at present, the just transition idea is only included in the preamble of the climate agreement.

In the discussion, a World Vision International representative, Beris Gwynne, said that we need to look creatively enough at the context and narrative that shapes the work we are to do for COP21 and onwards. She said that there are many existing approaches that can be scaled up if there were more creativity and proper financing, and called for increased partnerships.

Panelists stressed that education is the "golden thread"; the most powerful weapon against climate change is mass public education. A well-educated population can support and enable governments to achieve climate action. Investing in education is investing in the future and in human capital. Emphasis should also be put on women and youth. Reference was made to Article 6 of the UNFCCC, also known as Action for Climate Empowerment (ACE).

Amb. Luis Enrique Chávez Basagoita remembered that Peru chaired and hosted the UN Climate Change Conference (COP20), where several key points were agreed: the need of a universal binding climate change agreement to be signed in the COP21, the rules on how every country will submit their national contributions, the establishment of the Green Climate Fund and the launch of the Lima-Paris Action Agenda.

Nonetheless, the role of decent work was not considered at the COP20. This gap was filled thanks to an ILO initiative, which concluded with the signature of Peru and France of the "Joint call for action on climate change and decent work". As a direct result of this joint call, the draft decision released on 5 October 2015 has included this dimension in its 6th preambular paragraph and may be also present in the preambular section of the agreement.

Amb. Elisabeth Laurin from France said, "there are no jobs on a dead planet". She mentioned that the idea is to have a global environmental alliance based on 4 pillars: 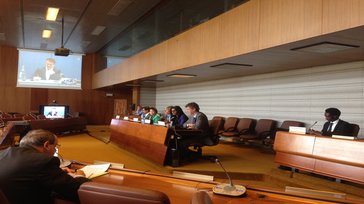