The dialogue aimed at providing a platform for sharing views and perspectives on ways in which the climate change and decent work agendas can be made mutually supportive, looking towards the United Nations climate change conference (COP21 ) (Paris, 30 November – 11 December 2015).

Government representatives, staff from international organizations, non-governmental and business organizations, who included experts in environmental issues and climate change discussed means for contributing to the COP21 and the “agenda of solutions”.

Opening remarks by the ILO and ambassadors of Peru and France in Geneva emphasized that the challenges of climate change on the one hand, and those of decent work and social inclusion, on the other, are inseparable. The 104th Session of the International Labour Conference (Geneva, 1-13 June 2015), at which the World of Work Summit, Thursday, 11 June 2015, will be on Climate change and the world of work, will be an occasion for governments and social partners to build momentum for action.

H.E. Ambassador Luis Enrique Chávez Basagoitia of Peru recalled that the COP20 in Lima, in December 2014, set the foundation for the Paris agreement at the end of the year. In addition, the session of the Ad Hoc Working Group on the Durban Platform for Enhanced Action (ADP), held on February 8-13, 2015 in Geneva, recognised the relevance of quality jobs and just transitions in the current negotiating text.

Looking towards COP21 in Paris, H.E. Ambassador Nicolas Niemtchinow of France highlighted how the world of work has an active and key role to play in the agenda of solutions and that a transition to a low-carbon economy will not be feasible without the full engagement of social partners. He concluded by emphasising how a low-carbon and greener economy offers opportunities for wealth and job creation.

The dialogue fostered an interactive exchange among panelists and participants by addressing both the: i) climate opportunities and challenges for decent work and; ii) the decent work solutions for climate action. Well recognized was that climate change poses major challenges for socio-economic development with implications for jobs and livelihoods in vital sectors such as agriculture, industry, and tourism. Indeed, climate change will have considerable employment and social impacts if no action is taken. Yet, ambitious climate action can lead to positive results in terms of employment, social inclusion with numerous solutions and experiences unfolding to build from demonstrating such opportunities.

Government representatives encouraged a more coordinated action among agencies in view of enhancing the effectiveness of the support provided to member States. Several agencies invited others to join existing common platforms such as the Global Framework for Climate Services (GFCS) to advance collaboration. In addition, PAGE - the Partnership for Action on Green Economy (ILO, UNEP, UNITAR, UNIDO and UNDP) was referred to as an effort for joint action among UN agencies.

Participants noted that climate and employment solutions have to be country-specific, anchored on national strategic and development policy frameworks with public-private collaboration. Several countries including Algeria, Bangladesh, Benin, Democratic Republic of Congo, Indonesia, and Uganda noted that developing countries in particular will need mechanisms and support to bridge their will to address climate with pressing development concerns, calling for cross-sectoral institutions building, human skills development, technical support and financial resources.

The need for more assessment and research based evidence on the overall macro-economic, development and labor market implications of climate change and climate response measures was emphasized, in view of guiding policy formulation. (See compilation of green jobs assessment reports).

It was noted that the conclusions and resolution adopted at the 102nd session of the International Labour Conference on Sustainable development, decent work and green jobs, offers elements of a policy framework that member States may consider.

The International Trade Union Confederation (ITUC) stressed the role and strong engagement of workers’ movements towards ambitious climate results with a key concern that there will be no jobs on a dead planet. The importance to develop skills and retrain workers to enable a smooth transition including in new sectors and occupations, and the key role of social dialogue was mentioned.

While some delegates alerted on the critical need to balance the dynamics of focused climate change negotiations with the importance of addressing the wide range of socio-economic implications of a future climate change agreement, participants stressed that to be effective and implementable, an international framework on climate change should enable and facilitate national actions rather than prescribing them.

As warned the Deputy Secretary-General of the World Meteorological Organization (WMO), human influence on the climate system is now unequivocal with greenhouse gas emissions are the highest in history and potentially lasting severe impacts for people and ecosystems.

Hence, the forthcoming COP21 in Paris this year will be a critical and historic moment to craft and agree to a universal new climate agreement that enables the international community to act with a long- term vision of a climate neutral world in the second half of the century.

The dialogue generated momentum, ideas and a wide range of solutions that actors in the World of Work can contribute to the climate agenda, such that Paris COP21 results lead to positive employment outcomes with more and better jobs and a just transition for all. 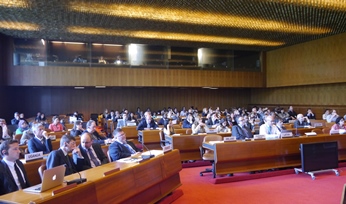