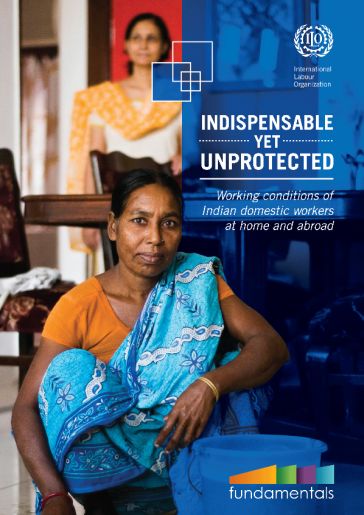 Télécharger:
The demand for domestic workers is on the increase within India and in many other countries. This indispensable, yet unrecognised and invisible, labour force is vulnerable and subject to abuse. This study seeks to understand the problems of women migrant domestic workers and to assess the nature of abuse they face, including whether some are victims of forced labour or trafficking for labour exploitation as defined in international law.

It examines two of the most frequented migration routes for female domestic workers in India: from the state of Kerala in Southern India to the Arab states and from the state of Jharkhand to New Delhi. Inadequate regulation and loopholes in existing procedures have allowed unregistered agents to exploit migrants for financial gain. These agents have established an efficient mechanism not only to facilitate irregular emigration but also to assist abused workers to return home through informal networks. Lured by better prospects and hoping their migration will turn out well, women play down the hardships they may face abroad. Migrant domestic workers from Jharkhand mostly live in, and many report physical abuse, abusive language, restriction of movement, long working hours and lack of clarity regarding wages.

The study uncovers indications that most domestic workers who migrate to the Arab States and some of the internal migrants face conditions of trafficking and forced labour.

Although the Government of India has developed an Integrated National Plan of Action against Trafficking and is taking steps to put remedial measures in place, the study concludes that there is a need for more comprehensive legislation against labour trafficking, and amendment of the Inter-State Migrant Workmen Act of 1978. Serious efforts by government are deemed necessary to plug legal and regulatory loopholes and to punish fraudulent and corrupt practices.