Download:
In 1930, the International Labour Organization (ILO) broadened the definition of slavery in its Convention to include ‘forced or compulsory labor.’ The Convention defines forced or compulsory labour as "...all work or service which is exacted from any person under the menace of any penalty and for which the said person has not offered himself voluntarily." (article 2.1)
According to the United Nations, 4 million people a year are traded against their will to work in a form of servitude. Forced labour takes many different forms including debt bondage, sex-trafficking and slavery. This sort of coercion is not limited to any particular region of the world, but rather is a global problem. Victims generally originate from poverty stricken countries within Africa, Asia, and, Latin America. However, 350,000 men and women forced into labour come from industrialized countries.
The ILO will be launching its Global Report on Forced Labour and Trafficking on 12 May in Geneva. The report has new numbers regarding the price of coercion, as well as the numerous lessons learned from actions taken to combat the issue of forced labour and trafficking. The ILO has been promoting a global alliance for the purpose of achieving the eradication of forced labour worldwide. In spite of this international effort to condemn the practice, the use of forced labour continues at an alarming rate.
This briefing will look at what new tactics are being employed to combat this issue and what steps must still be taken to create a world where human labour cannot be bought. 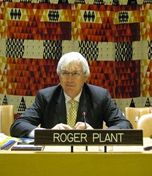