On 5 March 2020, Lithuania deposited its instrument of ratification of the Protocol of 2014 to the Forced Labour Convention, 1930, thereby becoming the forty-fifth country worldwide to ratify the Protocol.

Through this ratification, Lithuania is demonstrating its firm commitment to combating forced labour in all its forms. The Protocol, adopted by an overwhelming majority by the International Labour Conference in 2014, calls on ratifying States to adopt effective measures to combat forced labour, including trafficking in persons, debt bondage, or forced domestic labour, and to provide victims with protection and access to effective remedies, including compensation.

Forced labour takes different forms, including sexual exploitation, debt bondage and trafficking in persons. According to ILO global estimates, there are 24.9 million victims of forced labour throughout the world, of whom 4.8 million are victims of sexual exploitation. In the private sector, forced labour generates USD 150 billion in illegal profits every year. Several economic sectors are affected, including domestic work, construction, manufacturing, agriculture and fishing.

On depositing the instrument of ratification, H.E. Ambassador Andrius Krivas, Permanent Representative of the Republic of Lithuania to the UN Office and Other International Organizations in Geneva said: “Lithuania has ratified all the fundamental ILO Conventions, including the Forced Labour Convention, 1930 (No. 29); the centenary of the ILO was a good opportunity for us to speed up the ratification of the Forced Labour Protocol that supplements this important Convention, as Lithuania has committed to the consistent fight against forced labour and human trafficking.

Receiving the instrument of ratification, the ILO Director General Guy Ryder, stated: “I am pleased to receive this instrument of ratification, which bears witness to the commitment of Lithuania to combat trafficking in persons and forced labour in all its forms. This ratification is all the more important since the ILO’s global estimates show the urgency of adopting immediate and effective measures to eradicate forced labour and trafficking. By ratifying the Protocol, Lithuania is moving ahead towards the achievement of decent work and the delivering at the country-level of the 2030 UN Sustainable Development Goals, in particular SDG target 8.7”.

At the country level, Lithuania has made significant efforts to combat trafficking in persons, as illustrated by the adoption of an Action Plan against Trafficking in Human Beings for the period of 2017–19, providing for measures of monitoring, prevention, prosecution and victim protection, with a focus on the cooperation between stakeholders at different levels. Additionally, the high-level Commission for Combatting Trafficking in Human Beings was set up in 2016 in order to coordinate the efforts of all actors and to ensure the effective implementation of the planned activities and actions. 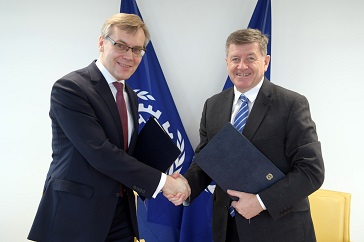