On 13 December 2019, the Government of New Zealand deposited with the Director General of the ILO the instrument of ratification of the Protocol of 2014 to the Forced Labour Convention, 1930, thereby becoming the forty-third country worldwide to ratify the Protocol.

Through the ratification of the Protocol, New Zealand marks the ILO’s Centenary by expressing a strong commitment to tackle all forms of forced labour, including trafficking in persons. The ILO estimates that nearly 25 million people worldwide are victims of forced labour. The Forced Labour Protocol requires ratifying States to take appropriate steps to prevent forced labour, to protect victims and ensure their access to justice and compensation.

On depositing the instrument of ratification, Her Excellency, Ambassador Jillian Dempster, Permanent Representative of New Zealand to the United Nations in Geneva, stated: “Forced labour is arguably one of the oldest and certainly the most shameful of labour practices. Its ongoing existence is both an affront to human rights and dignity and to the core principles and values New Zealand and the International Labour Organisation both stand for. By ratifying the Forced Labour Protocol, New Zealand confirms its strong commitment to eradicating forced labour in all its forms and to the global campaign to eradicate forced labour from the world”.

The Forced Labour Protocol will enter into force for New Zealand on 13 December 2020. 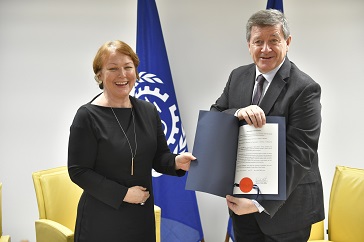