On 4 February 2019, Ireland deposited its instrument of ratification of the Protocol of 2014 to the Forced Labour Convention, 1930, thereby becoming the twenty-ninth country worldwide to ratify the Protocol. By ratifying the instrument, Ireland is demonstrating its firm commitment to combating forced labour in all its forms.

The Protocol, adopted by an overwhelming majority by the International Labour Conference in 2014, calls on ratifying States to adopt effective measures to combat forced labour, including debt bondage, forced domestic labour or trafficking in persons, and to protect victims and ensure their access to remedies and compensation.

When depositing the instrument of ratification, Dr. Orlaigh Quinn, Secretary General, Department of Business, Enterprise and Innovation, said: “The decision to ratify the Protocol demonstrates Ireland’s strong commitment to the ILO’s decent work agenda. It is particularly important that the decision has been taken in the ILO’s centenary year, which coincides with Ireland’s first ever term as a full member of the ILO Governing Body”.

On receiving the instrument of ratification, Guy Ryder, Director-General of the International Labour Organization, stated:
“I am very pleased to receive this instrument of ratification which once again bears witness to Ireland’s continued commitment to combat forced labour. Ireland is contributing to the celebration of the ILO’s centenary by ratifying the Protocol to a fundamental Convention: the Forced Labour Convention. This marks a crucial step towards the objective of 50 ratifications of the Protocol by the end of 2019. In this manner, Ireland continues to advance the achievement of decent work and delivery on the UN Sustainable Development Goals, in particular SDG target 8.7”.

At the national level, Ireland has long-standing experience of action to combat forced labour. In 1931, it was one of the first countries to ratify the Forced Labour Convention, 1930 (No. 29). It has developed a robust legal and institutional framework to combat trafficking in persons, particularly through the constant adaptation of the provisions of the Penal Code and the adoption, in 2016, of the second National Action Plan to Prevent and Combat Human Trafficking in Ireland, which includes a broad based prevention strategy and measures relating to identification, assistance and compensation of victims. 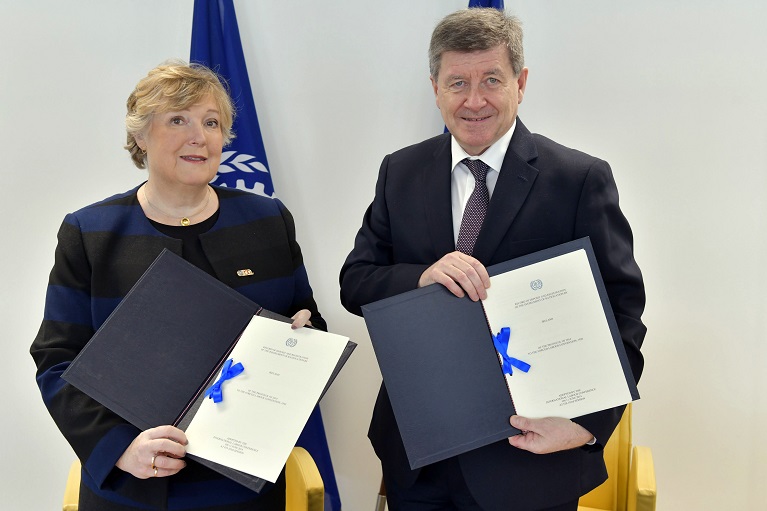