Spain has deposited its instrument of ratification of the Protocol of 2014 to the Forced Labour Convention, 1930, thereby becoming the 19th country worldwide and the 13th in Europe to ratify the Protocol. By ratifying the instrument, Spain is demonstrating its firm commitment to combating forced labour in all its forms and is giving a new impetus to action on this issue.

The Protocol calls on ratifying States to adopt effective measures to combat forced labour, including debt bondage, forced domestic labour and trafficking in persons, and to protect victims and ensure their access to remedies and compensation.

When depositing the instrument of ratification, Ms Fatima Báñez García, Minister of Employment and Social Security, said: “With the ratification of this instrument, Spain is once again reinforcing its close collaboration with the ILO and, as the country that has ratified the most Conventions, is consolidating its position as leader in defending the improvement of working conditions.”

Receiving the instrument of ratification, Guy Ryder, Director-General of the International Labour Organization, said:
“I am pleased to receive this instrument of ratification, which once again bears witness to the continued commitment of Spain to combat forced labour. This ratification comes just after the publication of global estimates of modern slavery, which show the urgency of adopting immediate and effective measures to eradicate this crime. Spain’s commitment marks one more step towards the objective of 50 ratifications of the Protocol by the end of 2018, as promoted by the “50forfreedom” campaign.

Spain has long-standing experience of action to combat forced labour. In 1932, it was one of the first countries to ratify the Forced Labour Convention, 1930 (No. 29). It has developed a robust legal and institutional framework to combat trafficking in persons, particularly through the constant adaptation of the provisions of the Penal Code; the adoption in 2009 of a first Global Plan of Action to Combat Trafficking in Persons; and the specific role played by the labour inspection services in the detection of criminal action arising out of labour exploitation and trafficking in persons. 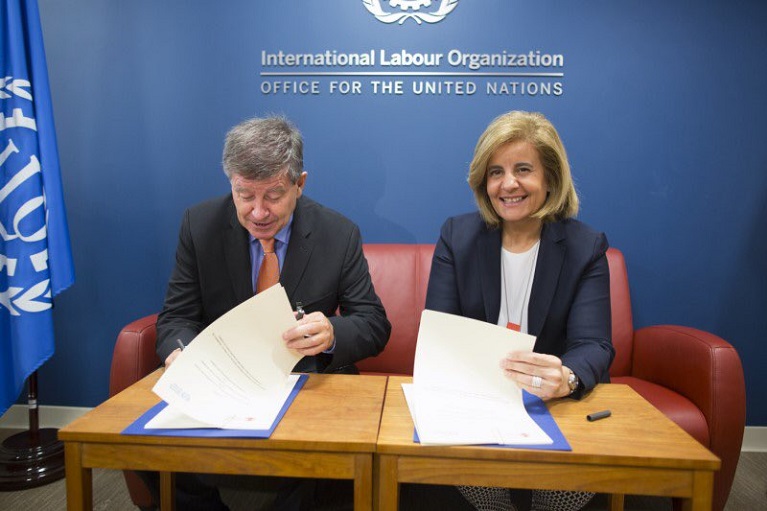