On 14 February 2019, Malta deposited with the Director General of the ILO the instruments of ratification of the Tripartite Consultation (International Labour Standards) Convention, 1976 (No. 144), as well as of the Protocol of 2014 to the Forced Labour Convention, 1930.

Malta is now the 146th ILO Member State to ratify Convention No. 144. The promotion of this governance Convention is a priority for the ILO and is the focus of a universal ratification campaign launched in 2018. Convention No. 144 promotes application of the principle of tripartite social dialogue, a cornerstone of the ILO since it was founded a century ago, calling for dialogue between the ILO’s tripartite constituents: governments, employers’ and workers’ organizations. The Convention facilitates the normative work of the ILO by requiring effective tripartite consultation in relation to the development, adoption and supervision of international labour standards governing all aspects of the world of work. The tripartite structure and working methods of the ILO promote the active engagement of its tripartite constituents, enabling them to arrive at consensus on international labour standards in an efficient manner and advance towards the ILO’s mandate of attaining social justice and decent work. In addition, Recommendation No. 152, which is the companion instrument to Convention No. 144 provides guidance in relation to tripartite consultations concerning ILO activities at the national level.

Through its ratification of the 2014 Protocol, Malta becomes the 30th country worldwide to ratify this important instrument, which aims to prevent and eliminate the use of all forms of forced or compulsory labour, including trafficking in persons. The Forced Labour Protocol requires governments to adopt new measures designed to prevent all forms of forced labour, including trafficking in persons, to protect victims and guarantee them access to justice and compensation.

The ILO estimates that about 24.9 million people worldwide are victims of forced labour, with 16 million people exploited in the private sector in activities such as domestic work, construction or agriculture; 4.8 million in forced sexual exploitation, and 4 million in forced labour imposed by state authorities. The ILO also estimates that this exploitation generates some US$150 billion a year in illicit profits.

On depositing the two ratification instruments, His Excellency Olaph Terribile, Ambassador, Permanent Representative of Malta to the UN Office and other International Organizations in Geneva, stated:
“As the International Labour Organisation (ILO) celebrates its centenary, we are faced with the realisation that the work and values that the organisation stands for remain relevant and applicable more so in today’s world. In recognizing the valuable work and ethics the organisation has sought to accomplish and transmit, Malta remains committed to adhere to the ethos and values enshrined in the organisation’s constitution and shall continue to seek and promote the enhancement of labour conditions both at a national level as well as within the appropriate multilateral platforms, confident in the belief that decent work is undeniably linked, to sustainability and prosperity. In noting the importance of Convention No 144, and in underlining our unwavering commitment to the standards and values that the organization stands for, it is with great honour and pleasure to note that Malta’s ratification of this major convention coincides with the Centenary of the ILO. It is indeed increasingly more significant that on this day Malta has also presented the ratification of the Protocol of the Convention of Forced Labour.“

At the national level, the Government of Malta has taken significant measures to develop the legal and institutional framework for combatting trafficking in persons, including by criminalizing all forms of trafficking as well as forced labour (section 248A-G) and by prescribing penalties of four to 12 years imprisonment. The Government has also strengthened its efforts towards the protection of victims of trafficking in persons by enacting the “Victims of Crime Act” in April 2015. This Act includes provisions regarding access of victims of trafficking to assistance services and compensation under the Criminal Injuries Compensation Scheme. Moreover, the Anti-Human Trafficking Monitoring Committee was set up in 2011 as the body responsible for drawing up and monitoring the implementation of anti-trafficking policies. A National Referral Mechanism has also been in use in Malta since 2013 and is mainly involved in the identification of victims or potential victims of trafficking.

The new ratifications support the effective promotion of the ILO’s Decent Work Agenda and achievement of the 2030 Sustainable Development Goals. These ratifications also constitute a significant contribution from Malta to mark the ILO’s first Centenary.

Convention No. 144 and the Forced Labour Protocol will enter into force for Malta on 14 February 2020. 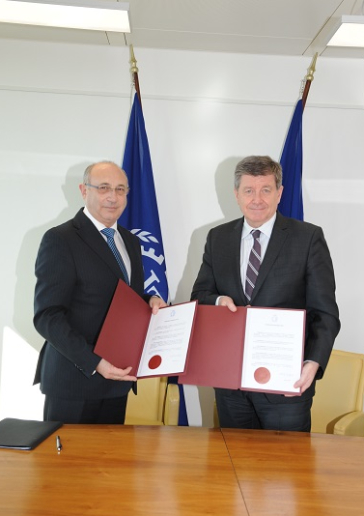