On 16 January 2018, the Government of the Republic of the Union of Myanmar has deposited with the International Labour Office the instrument of ratification of the Seafarers’ Identity Documents Convention (Revised), 2003 (No. 185), as amended. In so doing, Myanmar becomes the 35th ILO member State to ratify the Convention.

The amended version of the Convention entered into force on 8 June 2017. The issuance of the new seafarer’s identity document, with technology similar to the one currently used in electronic passports, will contribute strongly to facilitating access to shore leave, transfer and transit of seafarers while enhancing security in ports through the use of a secure and internationally recognized document.

In depositing the instrument of ratification, the Permanent Representative of the Republic of the Union of Myanmar to the United Nations Office and other international organizations in Geneva, Mr Htin Lynn, stated: “It is a great honour for me to present, on behalf of the Government of the Republic of the Union of Myanmar, the instrument of ratification of the Seafarers’ Identity Documents Convention (Revised), 2003 (No. 185), as amended. Myanmar has tens of thousands of seafarers braving the sea, and contributing to the country’s economy. The Government is committed to promote decent working and living conditions of all workers including seafarers. In line with this commitment, Myanmar is pleased to deposit the instrument of ratification of Convention No. 185 today. Myanmar shall be joining global efforts in close partnership with the ILO to promote compliance with the Convention.”

In receiving the instrument of ratification, the ILO Director-General, Mr Guy Ryder, stated: “It is with great pleasure that I welcome Myanmar among the States parties to Convention No. 185. Today’s ratification by Myanmar, an important labour supplying country for the maritime industry, which adds to the previous ratification in May 2016 of the Maritime Labour Convention, 2006, as amended (MLC, 2006), confirms and strengthens Myanmar’s commitment to ensuring decent working and living conditions for seafarers. Access to shore facilities and shore leave are indeed vital elements of seafarers’ general well-being and, therefore, to the achievement of safer shipping and cleaner oceans.”

“Myanmar joins other key labour supplying countries of the region which have already ratified the Convention- such as India, Indonesia and Sri Lanka – thus corroborating the importance of this instrument for the maritime sector”, Ryder added.

The Convention will enter into force for Myanmar on 16 July 2018, that is, six months after its ratification. For more background information, please visit the dedicated MLC webpage at /mlc. 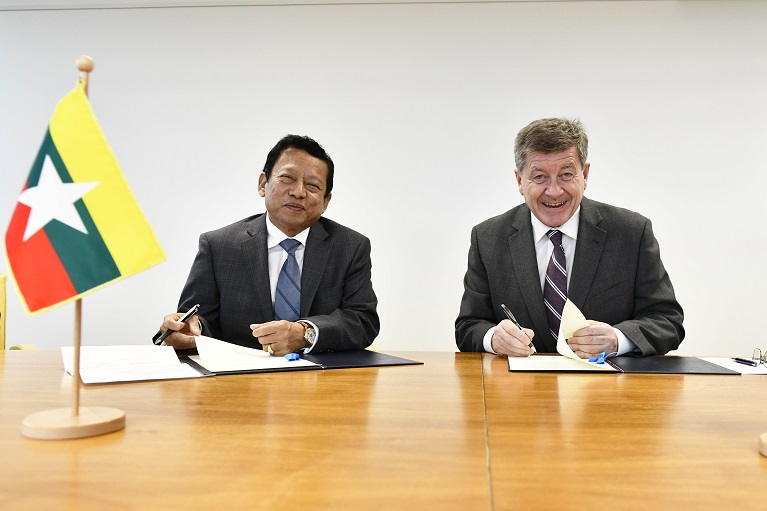