This story was written by the ILO Newsroom For official ILO statements and speeches, please visit our “Statements and Speeches” section.
What are the main problems in the fishing sector?

There is a range of pressing issues to be considered in the fishing industry – including pollution and environmental concerns, illegal, unregulated and unreported fishing, sustainability of fish stocks, transnational crime, the use of flags of convenience and non-compliance and so on. Chief among these issues - and intimately connected with all of these - is the exploitation and abuse of fishers including a significant number of cases that rise to the level of human trafficking. Human trafficking and forced labour within the fishing sector is a serious issue that merits attention and action by governments, civil society, researchers and not least the industry itself.

Do we have an idea about the extent of the problem?

Trafficking is, by its very nature, criminal and hidden, which makes it very difficult to research and estimate. There are efforts being taken – e.g. by agencies like ILO and research institutes – to more accurately estimate the extent of human trafficking and these are important initiatives. There have also been some small studies that have sought to explore the scope of exploitation or trafficking of fishers within a specific location or context. However, at this stage, we do not really have reliable estimates as to the scale of exploitation or human trafficking within the commercial fishing industry.

Regardless of the scale, we do know that it is happening in many countries and affecting a significant number of fishers. The recent repatriation of thousands of Cambodian, Thai and Burmese fishers from vessels that had been fishing in Indonesia is just the most recent example of this. But there are many more cases and examples that point to a prolific trend.

And while it is valuable to document the extent of the issue, it is equally important that we understand the nature of trafficking and exploitation in the fishing industry. Through the research NEXUS has conducted we have seen the devastating impact of trafficking in the lives of fishers – the impact on their physical health, mental well-being, economic situation and social relationships. We have also seen the destructive results in the families of trafficked workers and within their communities.

Understanding the nature of this exploitation and the impacts is the key to designing programmes and policies that can both prevent trafficking of fishers and protect those who have already been exploited.

Why has the issue of labour exploitation in the fishing industry only recently got broad media coverage?

Through our work, NEXUS has documented trafficking in a wide range of fields of work including domestic work, plantation/agriculture, factory work, construction, in the service sector, in the fishing industry and the merchant fleet. In this context, we should not underestimate the devastating impact that labour trafficking has on trafficked workers and their families. We also need to be careful to not treat labour abuses and sexual exploitation as mutually exclusive as we find that many trafficked workers also suffer sexual abuse and violence while exploited.

The Oslo meeting will discuss possible remedies to labour exploitation in the fishing industry. Where do you see the priorities for concrete action?

It is also about providing them with viable economic opportunities at home, which mean that they are not forced into accepting risky migration offers. Prevention also means adequately monitoring recruitment agencies so that those who do migrate for work in the fishing sector are able to do so safely. It will also be possible to prevent trafficking when companies take responsibility for cleaning up their supply chains.

On the other hand, we need to offer redress to persons who have been trafficked. The first step in this of course is to identify trafficked fishers – in destinations and in their origin country – to make sure that they are aware of their rights as trafficking victims and can access relevant assistance and protection. Too often trafficked fishers go unidentified in destination countries and are even criminalized – either for their involvement in illegal fishing or as irregular migrants.

Trafficking and exploitation has a devastating impact on trafficked fishers and their families and they often require assistance and support to recover and reintegrate after their abuse. And yet too few resources globally are spent to help victims to reintegrate and too little time is spent on this important effort. Trafficked persons may need any number of services – medical care, counseling, job placement, legal assistance, education, training or re-training – and these services need to be available to them as part of a protection response.

It is also important that fishers receive assistance over time. In our work on reintegration in different countries we find that successful reintegration is commonly a multi-year process and this is especially likely to be the case when trafficking victims have pre-existing problems and vulnerabilities (like debt, poverty, health issue) that must also be addressed as part of their recovery and reintegration. Improved reintegration of trafficked fishers can also serve to prevent their re-trafficking.

There is an important role to be played by States in recognizing the gravity of this issue and putting in place the measures needed to address and redress this form of trafficking. How this gets done though is context -specific and highly situational and we need to be designing our responses at a local level to ensure that they fit with the reality on the ground.

Last but not least, research and evaluation is an important part of designing and assessing the impact of any response and so this also needs to be a key part of a response.

What could be the role of the ILO in the fight against exploitation in the sector?

Obviously the ILO, as the UN body working on the promotion of labour rights, is an important actor in any response to address exploitation and abuses in this sector. And the ILO is already doing important work in this area on both programmatic and policy fronts in different countries. This includes support for legal and policy reform, trade unions and training of inspectors. Pushing for the ratification and implementation of the Work in Fishing Convention is just one area where ILO is playing an important role.

But this is not an issue that can be tackled by one agency or from one angle. It is a complex issue and requires a multi-agency and multi-sectoral response. It requires the commitment and engagement of governments, NGOs, trade unions, researchers, the private sector, media and consumers. We also need to bridge different fields of work – like anti-trafficking and the fishing sector. And we need to think carefully about how each of us working on human trafficking and labour rights – in our respective organizations and countries – can contribute to ending exploitation and trafficking in the fishing industry.


* Readers who wish to discuss these issues in more depth can contact Rebecca Surtees, Senior Researcher at NEXUS Institute at rsurtees@nexusinstitute. More analysis and publications can be found at www.NEXUSInstitute.net and @NEXUSInsitute. 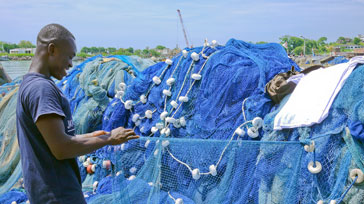