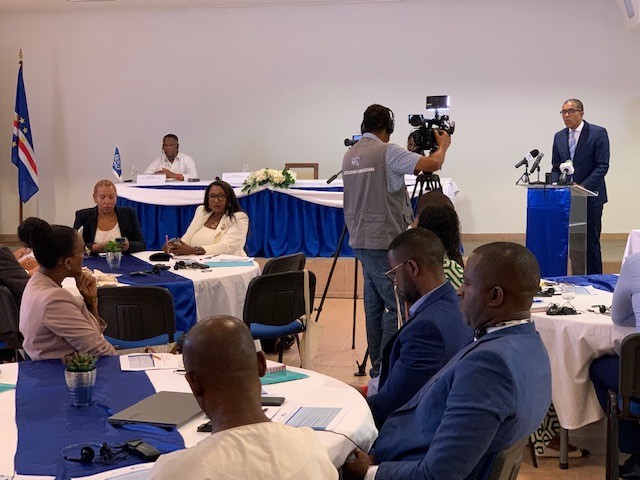 The Minister of Tourism of Cape Verde addressing the opening of the dialogue for the promotion of sustainable and responsible business practices in the tourism sector, Island of Sal, 26 October 2022

The European Union is the main trading partner of Cape Verde, accounting for more than 70 per cent of Cape Verde’s imports and receiving 95 per cent of the country's exports. Guaranteeing preferential access to all products exported to the EU market free of quotas and tariffs, is extremely important for the economic competitiveness of Cape Verde. As part of the GSP+ system, the Government of Cape Verde accepts to undergo regular monitoring by the EU on the progress made in the effective implementation of the ILO fundamental conventions.

Cape Verde benefits from the development cooperation project “Trade for Decent Work” implemented by the ILO and financed by the EU and Finland. The project aims to consolidate the efforts made by the government to timely submit reports on the application of ratified conventions, to strengthen the ILO tripartite constituents' capacity to actively participate in national processes to comply with international labour standards, and to strengthen the nexus between decent work and trade through engagement and dialogue with multinational enterprises by building a common understanding of the Tripartite Declaration of Principles concerning Multinational Enterprises and Social Policy (MNE Declaration) among tripartite constituents, enterprises and key national actors.

In March 2022 an awareness-raising workshop on the MNE Declaration aimed to enhance the capacity of the government, employers' and workers' organizations and social dialogue institutions on stimulating the business contribution to decent work (SDG 8). The hybrid format of the event allowed to connect participants attending a national workshop in Cape Verde and in Mozambique (where the Trade for Decent Work project is also implemented) as well as observers from Angola, Guinea-Bissau, and São Tomé and Príncipe. In addition to learning more on the MNE Declaration and its relevance to achieve national priorities and address certain challenges, Mrs. Neusa Van-Dúnem, national focal point for the promotion of the MNE Declaration for Portugal, addressed the participants as part of a home-host country dialogue and experience-sharing. Following this workshop, participants indicated their interest in continuing the dialogue and experience-sharing among Portuguese-speaking countries with ILO support.

Industrial fishery is of paramount importance for the country, not only because of the number of Cape Verdeans involved directly in the production, marketing and processing of fishing products but mainly for its important contribution in reducing the deficit of the balance of payments, through exports of derivate goods. Major fish processing and canning industries are based in São Vicente and benefit from foreign capital.

In September 2022, in the context of the Trade for Decent project, 30 participants from the government, employers' and workers' organizations as well as enterprises in the fish processing sector participated in a sensitization workshop on the MNE Declaration in São Vicente. The event was officially opened by the Minister of Family and Social Inclusion, the President of the Cape Verdean Confederation of Free Trade Unions, the Secretary General of the National Union of Workers of Cape Verde, the President of the Barlavento Chamber of Commerce and the representative of the European Union Delegation in Cape Verde. Participants reflected on how enterprises operating in the sector could contribute to the achievement of decent work (SDG 8) taking into account the guidance offered by the ILO MNE Declaration and agreed on key follow up actions, namely, promoting the transition to the formal economy and a good uptake of international labour labour standards among value chain stakeholders, as well as reinforcing vocational education and training for fishing communities.

Promoting sustainable and responsible business practices in the tourism sector

Using the MNE Declaration as an umbrella for collective action, a dialogue took place in October 2022 to discuss opportunities and challenges for the realization of decent work in the tourism sector. The dialogue event was organized on the Island of Sal well known for its white sandy beaches and for being a popular destination for kite surfers. The dialogue was officially opened by the Minister of Tourism and attended by 37 participants including officials from the Ministry of Labour, representatives of employers’ and workers organizations, enterprises operating in the sector, and the European Union. The dialogue resulted in the decision to establish a taskforce that will discuss the implementation of key identified follow up actions to promote the MNE Declaration in the sector for the realization of decent work.

The ILO continues providing technical assistance to Cape Verde in the context of Trade for Decent Work project to support the country’s efforts to put in place national and sectoral approaches to promote the MNE Declaration and encourage the uptake of its principles in two sectors of critical importance for the country. Technical support will be provided for the implementation of key actions contained in the national roadmap for the promotion of the MNE Declaration, the creation of the taskforce for the tourism sector and to encourage the application of the principles of the MNE Declaration in the fish processing sector.