BRUSSELS (ILO News) – A new report by the ILO in cooperation with the European Commission shows that increasing inequalities in recent years have led to a reduction of the middle class in Europe. The report entitled Trends in the world of work: What effects on inequalities and middle-income groups was presented at a high-level conference.

The financial and economic crisis has severely affected middle-income groups – mainly defined in the report as those groups in the income range between 60 to 200 per cent of the median income. Almost all of the EU countries studied have experienced a decrease in the size of their middle class, and the share of total income going to the middle class. “A weaker middle class leads to lower aggregate demand, puts a break on long-term growth and may cause social and political instability,” said Daniel Vaughan-Whitehead, co-author and editor of the report.

The middle class in most European countries grew rapidly in the 1980s and 1990s, driven mainly by the increase in labour market participation of both women and men, and the emergence of the dual-earnings household model. On the other hand, long-terms trends like the changing structure of jobs, and the growth of non-standard forms of employments were aggravated by additional factors brought by the crisis, such as rising unemployment, further real wage decline, and reforms of social dialogue institutions, that further contributed to the erosion of the middle class in Europe during the past decade.

“This trend is worrying, especially because it seems to hurt young people the most,” explained Vaughan-Whitehead. “The very high youth unemployment rates could result in a lower probability of being part of the middle class, and create an intergenerational gap.”

Some occupations that traditionally represented the middle class, such as teachers and public administration employees, do not systematically belong to middle-income groups anymore. Employment security is no longer the norm in the public sector, evidenced by a rapid increase in the number of temporary contracts in the public sector throughout Europe. The report finds that women have been particularly affected by this process: the public sector is not only a major source of employment for them, the reduced quality and supply of public services, such as childcare, also negatively impact their participation in the labour market.

Employment rates for older workers (55-64 years) rose from 38.4% in 2002 to 51.8% in 2014. In most European countries, the postponement of retirement provides a means of sustaining middle class status.

Despite the crisis, some countries have been able to maintain a stable middle class. This was the case for Belgium, France, the Netherlands and Sweden, all countries with resilient industrial relations. Conversely, the weakening of the social dialogue in countries such as Greece, Spain and Ireland, has certainly contributed to greater inequalities. In countries with limited collective bargaining like Hungary and the Baltic states, the growth of the middle class depends directly on the economic context.

Mechanisms of wage fixing and wage bargaining also play a role. The survival of the indexation system in Belgium for instance, seems to have contributed to limit inequalities.

“In order to reduce inequalities, policy makers need to take measures aimed specifically at the middle class,” concludes Heinz Koller, ILO Regional Director for Europe and Central Asia. “Such initiatives should not only touch on the world of work, but also take into account related areas such as taxation, education and social protection.”

Trends in the world of work: What effects on inequalities and middle-income groups is a publication by the ILO in cooperation with the European Commission with contributions and case studies from high-level experts in 15 countries: Belgium, France, Germany, Greece, Hungary, Ireland, Italy, Portugal, Spain, Sweden, the Baltic States, the Netherlands and the UK. The introductory chapter also provides an overview of the situation in 30 European countries, exploring the trends pertaining to the middle class and the world of work in Europe, and examining national differences. 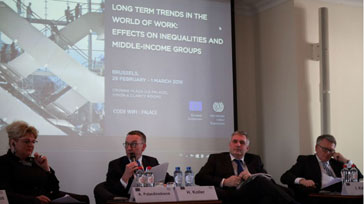