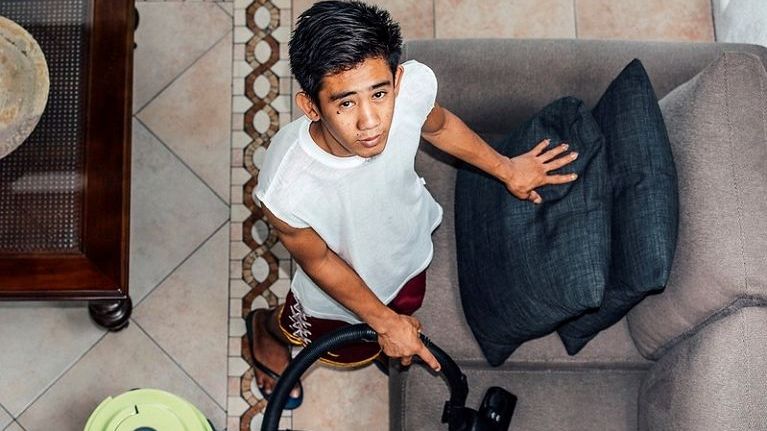 Denmark, a domestic worker in the Philippines. © ILO

The Domestic Workers Convention was adopted 10 years ago. What’s changed since?

However, there are more and more people aware of domestic work issues than 10 years ago. That is in part due to the convention and also down to the efforts of domestic workers’ organizations that shine light on the issue. There is considerably more dialogue on care work, and the need to invest in care solutions for ageing societies, as well as new conversations around skills in the domestic work sector. So things are changing, but we haven't really seen the commensurate changes in terms of formalization or equal legal protection of domestic work jobs.

How have domestic workers been impacted by the COVID-19 pandemic?

“Domestic workers are two or three times higher or more likely to lose their jobs or lose working hours during COVID-19 than other workers.” – Anna Olsen, Technical Specialist, ILO

The pandemic has exacerbated many of the pre-existing challenges and issues that domestic workers already faced.

We have limited data from the ASEAN region that shows domestic workers were two or three times more likely to lose their jobs during COVID-19 than other workers. Simultaneously, many employers’ standards around cleanliness in their homes changed due to the infection risk, which means the demands on domestic workers have multiplied significantly. This is coupled with increased pressure and demands for childcare and care work as many families are staying at home. In addition, a recent study from Hong Kong showed that domestic workers suffered violence and harassment in their workplaces at much higher rates during COVID-19, which is expected to also be true across the region.

What are the main challenges domestic workers still face today?

The main challenge, which also hints at the primary solution, is that the majority of domestic workers in this region are still not fully covered by the rights and protection offered by national labour laws. Over 80 per cent of domestic workers remain in informal jobs. High levels of informality mean that domestic workers are less likely to be able to claim their rights to decent work or access social security schemes, including medical care, maternity protection, unemployment benefits and more.

Domestic work remains a sector characterised by very long or very short work hours, with over half of workers working outside the range of normal hours many formal employees enjoy. Despite this, domestic workers earn on average half the amount of other workers, with even less earnings if they are in informal employment. Yet another challenge is the prevalence of sexual harassment and violence that continue to be reported regularly by domestic workers, both before and during the pandemic.

Many of these issues compound one another and limit domestic workers from achieving decent working conditions.

What needs to change?

At the grassroots level, some broader change also needs to happen around how society views work within the home, and eliminating discrimination on the basis of gender, class or ethnicity. These are longer-term problems that underpin many of the poor working conditions in domestic work.

Lastly, we often fail to recognise the diversity within the sector. Cleaners, drivers, security guards, cooks, nannies and aged carers are all scooped up under the ‘domestic work’ label. Yet these workers vary hugely in terms of skillsets, working conditions and measures required to improve their livelihoods. By acknowledging the vast diversity and specific job profiles within domestic work, we can start recognizing the various domestic work jobs as uniquely skilled roles that should be fairly compensated, and close decent work deficits in the process.

What can be done for more countries to ratify Convention No. 189?

The 10th anniversary of the convention and COVID-19 should be a launch pad to start engaging in more dialogue with governments, social partners and communities about how essential care and domestic work actually is in our societies. A forward-looking conversation about care work, and the realities of the care economy as societies age, will encourage further consideration on ratification and implementation of labour standards in domestic work.

Involving domestic workers in these dialogues is key. Passing the baton to domestic worker organizations is absolutely crucial in order to properly listen and enact change based on real needs. This will also help tackle stigma and stereotypes surrounding domestic work; amplifying domestic workers’ voices can challenge the gender and social norms that frame domestic work as somehow less contributory or ‘valuable’ than other kinds of work.