On behalf of the workers group, I am pleased to speak to you today about the proposed Convention and Recommendation on Violence and Harassment in the World of Work.

This is an historic day.

We are celebrating the centenary of the International Labour Organization, and I can think of no better gift than a Convention and Recommendation that addresses one of the most pernicious and complex challenges facing workers and employers around the globe: violence and harassment – a Convention that truly leaves no one behind.

Last year when I addressed this room, I invited everyone to endeavor to listen, to take some time to really walk in the shoes of others, and then to return to the conversation ready to work together, to find that necessary balance between the aspirational and the practical.

I am pleased to report that every member of the Committee accepted my invitation.

Listening to the closing remarks in our Committee yesterday, I was encouraged by the overwhelming support expressed by Governments in favour of both of these instruments. I truly believe what you have before you today are texts that we can all be proud of – instruments that are both ground-breaking and visionary, but also practical and actionable.

The hope and sense of possibility that this Convention and Recommendation will bring is what is going to drive change forward as we move from negotiation and adoption, to ratification and implementation.

Let’s reflect on some important achievements.

Let me say that again: everyone has a right to a world of work free from violence and harassment.

Of course, with rights come responsibilities. The text makes it clear that all of us - governments, employers and workers - in the world of work have a role to play to provide and sustain a work culture that is based on mutual respect and the dignity of human beings - by refraining from, preventing and addressing violence and harassment.

Secondly, on leaving no-one behind:

The Convention takes an inclusive approach, extending protection to all workers irrespective of their contractual status, including individuals who are exercising the authority of an employer, as well as jobseekers, trainees, interns and apprentices, volunteers and others.

The Convention also makes it clear that violence and harassment involving third parties – whether they are clients, customers, patients, or members of the public - must be considered and addressed. For workers whose jobs involve dealing with the public and in public space, this recognition is extremely important.

The Convention clearly indicates the places and situations, in the course of, linked with, or arising out of work, where violence and harassment occur : in the physical workplace as well during social gatherings, online, where workers rest, eat or attend to their health and sanitation needs, and during the commute.

And it covers all sectors – public and private, including the informal economy where more than 60 percent of workers – amongst the most vulnerable of workers - are found.

Our goal, from the outset, was to craft a Convention and Recommendation that would leave no one behind. We were very clear: people whose experience of violence and harassment is exacerbated by discrimination and inequality must have the strongest and most robust protection.

The process of reaching an agreement on how best to protect people with multiple and intersecting identities was extremely difficult for everyone on the workers’ bench. Whether it’s age, disability, race, ethnicity, indigenous status, sexual orientation, gender identity or any other ground, every person in the world of work should feel that this Convention and Recommendation covers them. That was our priority.

As we head into the next 100 years of the ILO, we are confident that we have a convention and recommendation that together enable everyone to be included, and protected.

Thirdly, on gender-based violence and harassment

For the workers, it was essential that the instruments acknowledge the prevalence of gender-based violence and harassment in the world of work. The stories we received, from workplaces in every sector, in every corner of the globe, made this prevalence abundantly clear.

No-one should be expected to endure any form of gender-based violence and harassment when they come to work - whether it is persistent comments and jokes, leering, sexist remarks, groping or worse. Sadly, this is the reality for too many workers.

The presence of gender-based violence and harassment in the world of work silences not only those who are targeted but those who fear retribution or retaliation if they speak up against the abuse and violence they witness. This makes it one of the most effective tools of intimidation, and a significant barrier to the participation of women in the world of work.

Women have been standing up and speaking out – through #MeToo, #YoTambien and other movements. But to eradicate gender-based violence in the world of work, we must make transformative change a priority in our workplaces. While governments, employers and workers organizations all have a role to play, this change must be informed and led by those workers who are disproportionately impacted. This change must also incorporate strategies to address the social norms that normalize and perpetuate gender inequalities, maintain unequal power relations in the workplace and enable violence and harassment to continue.

Both the Convention and the Recommendation set out a clear pathway toward that transformative change.

Lastly, on the impacts of domestic violence in the world of work

No worker should have to choose between their job and their safety – or the safety of their children. The language in the Convention and the guidelines in the Recommendation provide governments with some clear sign posts for future action.

The Convention requires that the first step towards prevention is to identify the sectors, occupations and work arrangements where workers and others are more exposed to violence and harassment. This is important to us: certain jobs carry with them greater risks, whether from the nature of the work itself, or from the way the work is designed, organized and managed. Sectors like journalism, the garment industry, health care, mining and transport each have different challenges and may require specific measures. There is no one-size-fits-all solution.
The Convention and Recommendation invites governments to work together with the social partners to determine the best measures to take.

In conclusion, let me say:

Every person in the world of work should feel that this Convention and Recommendation applies to them. This is the great achievement of these instruments. It also demonstrates the value – the power – of tripartism and the role the ILO can play to help improve peoples’ working lives, and to promote peace, social justice and democracy in the world.

We set out to draft a standard that would stand the test of time, that would carry us forward into the next century of the ILO, and would meet the challenges of the future world of work.

It is up to us to create the opportunity and fuel the momentum needed to realize the right to a world of work free from harassment and violence. We can achieve it, by working together as governments, employers and workers to create safe, respectful working environments for everyone. 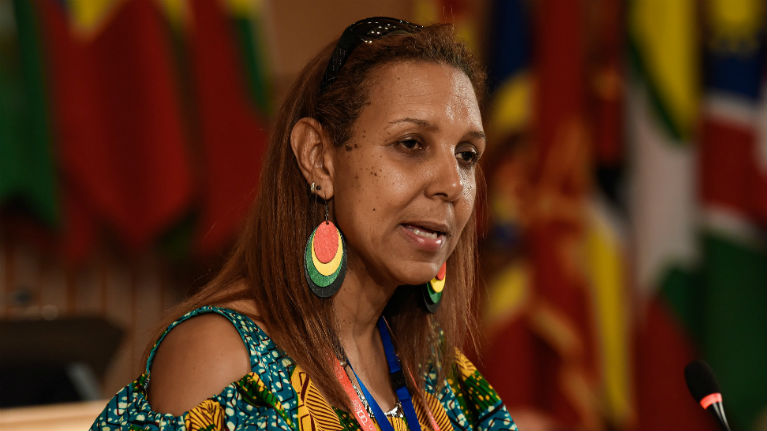