Distinguished President, distinguished government representatives, distinguished delegates. It has been an honour to be the worker vice president on the occasion of this Centenary Conference.

On behalf of the Workers’ Group, we celebrate the adoption of the Convention and Recommendation on eliminating violence and harassment in the world of work and the ILO Centenary Declaration which mark the tripartite commitment to social justice.

The negotiations of the Centenary Declaration were long and difficult but in the end the three groups were able to come together. The Workers’ Group would have welcomed a more visionary and ambitious Declaration, yet we are committed to work with Governments and Employers to shape a future of work that realizes the ILO founding vision of social justice into the 21st century. We welcome the clear statement that all workers should enjoy a floor of labour protection that includes: respect for fundamental rights, an adequate minimum wage, maximum limits on working time, and safety and health at work. We also strongly support and welcome the commitment to include safety and healthy working conditions as an additional fundamental right.

What makes the ILO unique, is its tripartite nature, its normative system, and its core goal of social justice which is the cornerstone for lasting peace. The promotion, defence and implementation in law and practice of freedom of association and collective bargaining, have been and should be the pillars of the ILO work for the next century.

The Workers’ Group came to this Conference guided by the Philadelphia Declaration and to deal with “the unfinished business” in the context of a changing world of work. Our commitment was translated in our active engagement in the committees, in the thematic discussions, and in the rich conversations that took place during the Conference. For each and everyone of our delegates, being here is an honour, as they come representing their constituents who gave them the mandate to defend the interests of working people. We are celebrating the Centenary here in Geneva, but all of us are going back home, to face our realities and to respond to our members, working people, that are in many cases dealing with the same problems of indecent working conditions and salaries, indecent working hours, workers whose rights to organize and bargain are being denied or undermined.

We are here to keep working together for all workers, to make sure that they can enjoy their rights to the full. A lot has been done in this century, but a lot remains to be done.

Unfortunately, one of the signs of these times are inequalities, particularly income inequalities among people and nations. The Global Commission on the Future of Work has highlighted many other challenges that the ILO is called to address. Distinguished delegates, the ILO is the house of social justice and to keep up with the excellent work that has been done for a century, it should take seriously the fight against inequalities, as the backdrop on which the future of work challenges are developing.

We do need to tackle income inequalities together if we want lasting peace. We need to support the ILO to take the lead in promoting policy coherence in the multilateral system to put decent work at the centre of the global agenda.

We are not afraid of the drivers of change in the world of work, we are optimistic by nature, otherwise we wouldn’t be here fighting for a better future. We have brought to the table the concept of Just Transition. Now we want to turn it into a reality and a practice, to face these major transformations that we need to go through in order to deal with climate change and digital transformations. We insist that all workers have the same rights, as the basis to any conversation to deal with demographic changes.

Our commitment is clear and we want a stronger ILO for the next century.

Distinguished delegates, we said it many times during the Conference, and we said it in the streets on Monday: it is time for a new social contract. 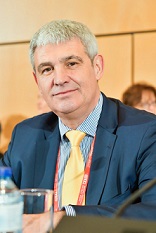